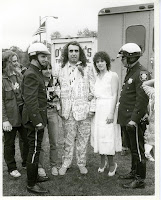 One thing leads to another. A couple of weeks ago I blogged about the ukulele, a word I had gotten wrong, or at least less right (with ukelele) in a spelling bee one time; then I was thinking about maybe even getting one myself (I know this kid who has a uke and they make a very cute couple); and then I went to see Singin' in the Rain over in Washington Park. It had been spitting and threatening all day and I had told a friend, "I'm not sure I really wanna see Singin' in the Rain in the rain..." He wittily riposted: "Yeah, you want to suspend disbelief, not belief." Believe it or not, they actually did have to suspend the performance for a little while when it started to drizzle, since they didn't want to risk another actor slipping and falling like on opening night. Although the stage crew makes it "rain" during the play itself (twice, and to great effect), they couldn't have just any old deluge coming down. While we waited damply for the moppers to mop up and the dancers to resume dancing, the PA system entertained us with wonderful standards from the twenties and thirties—then even more wonderfully, "Tiptoe Through the Tulips" by the late great Tiny Tim. At that moment a beautiful rainbow arched across the stage. ("We paid a lot of money for that!" joked the director.) I recall once about thirty years ago when Herbert Khaury (Tiny Tim's given name) had come to this park in person and sung his signature tune at the Tulip Festival. With all this in mind, I told a coworker the other day that I definitely wanted a ukulele. He said his mom had always wanted an electric bass and he wanted to get her one, but they were rather expensive. He added that she was also left-handed. I mentioned that Tiny Tim (whom he had never heard of, despite being quite musically literate) had played the ukulele. And as we later found out, was left-handed also. Much like blues singer and Seeger friend Elizabeth Cotten (whose distinctive guitar style was called "Cotten picking"), he suspended disbelief by turning his instrument upside down and teaching himself how to strum it backwards. And when he trilled in the park in his true falsetto, it rained tulips as well as raindrops on the crowd. Just to clear up any suspense, there were three cases of today's typo in OhioLINK, and 93 in WorldCat.
(Tiny Tim and Miss Vicki at the 1984 Tulip Fest in Washington Park, by AlbanyGroup Archive.)