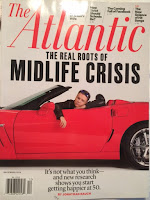 It seems like an awful lot of changes are happening here in Albany (as well as in my online life) over the past couple of weeks now, and unfortunately, none of them are really happy ones. Three local institutions (all dating from the 1970s and '80s) are, if not quite going kaput, being considerably altered. Our longtime health-food co-op's management has determined it can no longer support the "member worker" program, essentially turning Honest Weight into a regular old retail store. Our beloved independent movie theater, the Spectrum, has been sold to a national chain. And possibly worst of all, the wonderful and award-winning alternative newsweekly Metroland was seized by the state for non-payment of back taxes. Finally, in a disorienting coup de grâce, fans have just learned that Emily Yoffe (aka "Dear Prudence") will be leaving Slate this week to take a new job at the Atlantic. Times do change, it's true, especially the older you get, but it's all still a bitter pill to swallow. In any event, life goes on; what's the alternative? The Atlantic Monthly (an alternative to the NYC-based Harper's and the New Yorker) was founded in Boston, Massachusetts, on November 9, 1857 (according to Wikipedia's article for November 9, although that looks like it might be a typo itself since the page for the Atlantic says that the first issue was published on Nov. 1), and it's still around today. There were 16 examples of Altantic (for Atlantic) found in OhioLINK, and 423 in WorldCat.