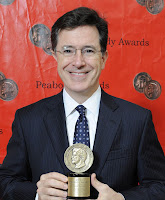 Today's typo is a fairly routine one, being for a word that is quite common to catalogers, and to all of us, really. But apparently it is one we've never blogged about here before. Friday may have started out routinely as well, for most of us, but as the whole world now knows, it ended in an unspeakable tragedy in France. And yet there is almost a fearful sense of predictability, a grim mundanity about it all—the "banality of evil," as Hannah Arendt once put it. Je ne sais quoi is a lovely French phrase for "an indefinable, elusive quality, especially a pleasing one." It literally means: "I know not what." The enormity of the Paris attacks can scarcely be put into words either, it seems, and some of our most trenchant and passionate commentators went with empathy over editorializing in their immediate wake. Stephen Colbert was both moving and amusing at once when he assured his listeners: "If it makes you feel a connection to the people of Paris, go drink a bottle of Bordeaux. Eat a croissant at Au Bon Pain. Slap on a beret and smoke a cigarette like this. Go eat some French fries, which I am now calling Freedom fries in honor of the French people. Anything that is an attempt at human connection in the world right now is positive... Did you get up this morning and not try to kill someone? Then you’re on the right side." Early and late press releases are full of the terrible news today. But there will always be time for a new edition. There were 56 cases of this typo in OhioLINK, and "too many records found for your search" in WorldCat.

(Stephen Colbert in May 2012, holding his Peabody Award, from Wikimedia Commons.)