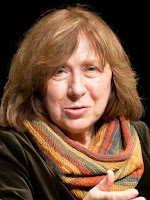 Each autumn I look forward to the week-long announcements about the various Nobel Prizes. As you might know, this year’s award for literature went to Belarusian writer Svetlana Alexievich. The Swedish Academy honored the author of Voices from Chernobyl (Charnobylʹskai︠a︡ malitva) and other works for “for her polyphonic writings, a monument to suffering and courage in our time.” Ms. Alexievich was chosen from a field of 198 individual nominees.

Did you know the literature prize itself has an interesting story? According to the official Web site Nobelprize.org, since the bestowing of the first prize in 1901, a total of 108 Nobel prizes in literature have been awarded. (No prizes were awarded during the years 1914, 1918, 1935, or 1940-1943.) On four occasions, the prize was shared by two authors, bringing the total number of Nobel laureates in literature to 112. To date, only 14 women have achieved this high honor. The most common languages for award winners to write in are English, French, German, and Spanish.

Literatature* is just one of the many potential typing pitfalls for the word literature. It can be found 5 times in OhioLINK and 10 in WorldCat. You might not win any prizes for tidying up such errors, but at least you can take pride in knowing that your catalog is a better place.