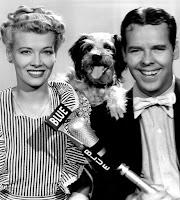 A coworker was talking recently about feeling nervous or anxious and said, "I get myself into such a tither..." Normally, I try not to be an obnoxious ass, but frankly this woman is so funny and charitable, I figured I would take my chances this time. "You know," I said, "there's actually no such word as 'tither.' There's dither, and tizzy, and even lather. But there's no 'tither'..." She nicely burst out laughing in reply. (We then agreed that young folks these days have probably never heard of any of these words.) Speaking of obnoxious asses, that's just how Dagwood Bumstead often regarded his boss, Mr. Dithers, a pint-sized and petty tyrant whose full name was "Julius Caesar Dithers." But just like my hapless colleague and me, the two men were fundamentally friends. Some people would argue that Dagwood Bumstead (bum + homestead?) was even sillier and more indecisive than his supervisor, as is perhaps Canadian Prime Minister Paul Martin, who was dubbed "Mr. Dithers" by the press for a similar tendency to hem and haw. "Blondie" (the real star of the strip) was created by Chic Young, who debuted the cartoon on September 8, 1930. He had begun his career in 1924 with another newspaper strip about a fetching and somewhat scheming young flapper called Dumb Dora. Dora Bell (her adorable real name), according to the tagline, "wasn't as dumb as she looked." The term was widely applied to the wild young women of that era and was further popularized by George Burns and Gracie Allen's vaudeville act. Several years later, Dora morphed into the nominally less dumb, but blatantly more blonde and matronly "Blondie," who has been ruling the Bumstead roost for nigh on ninety years now. So if anyone ever calls you a "dumb Dora" (or even implies as much by correcting your creative syntax), just bear in mind that Allen is generally considered to have been the brains behind Burns, and don't work yourself into a tither. There were 17 cases of today's typo in OhioLINK, and an even 600 in WorldCat. Another way to approach this typo is to search on Youg* + Young*, which garnered us 23 hits in the former, and 439 in the latter. In both cases, you should see a fair number of false positives (Asian names, variant spellings, etc.), but most will be typos for forms of the English word young.

( Photo of Penny Singleton as Blondie and Arthur Lake as Dagwood Bumstead from the radio program Blondie, 6 July 1944, from Wikimedia Commons.)