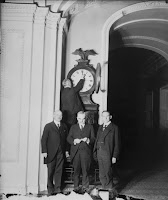 Daylight Saving Time, a thing that many of us tend to look forward to in these late gray waning days of winter, was first instituted on March 31, 1918, as a wartime measure to help conserve fuel. This photograph shows the very first man to "turn the clock ahead," as three others stand nervously by—the whole lot of them looking rather like sheepish schoolboys caught in the act, or white whiskered mice having a fine old "Hickory Dickory Dock" of it. (I'm teasing. In truth, they were only senators, albeit ones who probably did feel a little like travelers in a sci-fi tall tale, somehow altering the very fabric of time.) Some people would say that the date of the occasion was inadvertently well timed too, the whole thing being perhaps a bit of a Fool's errand right from the start. In 1784, Ben Franklin published an anonymous letter entitled "An Economical Project for Diminishing the Cost of Light," in which he observed that Parisians burned candles after dark, and then slept past dawn. He proposed "taxing shutters, rationing candles, and waking the public by ringing church bells and firing cannons at sunrise." It was satire, but Franklin is also known for the proverb "Early to bed and early to rise makes a man healthy, wealthy, and wise." (James Thurber offered a differing point of view when he stated in The New Yorker in 1939: "Early to rise and early to bed makes a male healthy and wealthy and dead.") In 1966, Lyndon Johnson signed the Uniform Time Act into law and we've all been "springing forward" and "falling back" ever since. The time-shifting system still has its critics, who say that simply trying to adjust to the shift can be unhealthy or risky, and that our lifestyles have changed so much that the purported benefits of "daylight saving" simply no longer exist or are outweighed by the drawbacks. In any event, don't forget to fool with your clocks tonight, kiddos! (Just kidding, of course. You should have already done that, on March 13th.) And now that we all know what time it is, let's turn our attention to today's typo (Oiho for Ohio), found twice in OhioLINK, and fifteen times in WorldCat.

Carol Reid
Posted by librarytypos at 5:30 AM

I'm a little disappointed that the post relating to the only common misspelling of my home state only references Ohio with a clock that is not in Ohio, and has an unknown history for why it is called the Ohio clock. There are so many other things that make Ohio great. Presidents, astronauts, inventors, our history and museums, sports, roller coasters, and if nothing else the buckeye tree, which many people don't know what a buckeye is or looks like.