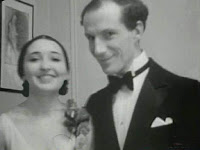 Google had a great image today in honor of Clara Rockmore, an early proponent and expert player of the hands-free musical instrument known as the theremin. Rockmore was born Clara Reisenberg in Vilnius, Lithuania, on March 9, 1911, the youngest of three girls. She was a child prodigy on the violin, reportedly had "perfect pitch," and at the age of four became the youngest student ever admitted to the Saint Petersburg Conservatory. Clara was close personal friends with the inventor Léon Theremin and worked alongside him perfecting and finessing his instrument. (Although he actually proposed to her on several occasions, she wound up marrying attorney Robert Rockmore instead.) As we breathlessly wait out the last few weeks of winter here, enjoy this eerie and evocative rendition of Ira Gershwin's "Summertime" from Clara Rockmore's Lost Theremin Album, produced by her nephew in 2006. Although the theremin is making something of a comeback, it's still a sort of "geeky" thing to play, as wonderfully demonstrated by Jim Parsons ("Sheldon") on The Big Bang Theory in the episode "The Bus Pants Utilization." There were 36 hits on Insturm* (for instrum*) in OhioLINK today, and 636 in WorldCat.