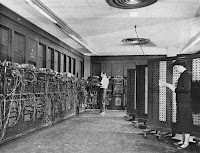 Betty Holberton (née Frances Elizabeth Snyder) was born in Philadelphia on March 7, 1917. After enrolling at the University of Pennsylvania, where she was asked by her math professor if she wouldn't be happier at home taking care of the kids, she decided to take up journalism instead, the kind of job that was both open to women and designed to get you out of town. But when World War II rolled around, Holberton was hired by the Army to compute ballistics trajectories and chosen to work, along with five other women, on the ENIAC (Electronic Numerical Integrator and Computer), now thought to have been the "first general-purpose electronic digital computer." This was deemed "subprofessional" work and the women who did it were called "computers." Holberton proved especially adept at understanding the new behemoth and was said to have "solved more problems in her sleep than other people did awake." Her achievements in the field of programming are truly impressive and far too numerous to mention here, but suffice it to say that in 1997, four years before her death, she received the Augusta Ada Lovelace Award and the IEEE Computer Pioneer Award, and was also inducted into the Women in Technology International Hall of Fame. This photo of Betty and the ENIAC reminds me of the 1957 film Desk Set, about a librarian whose skills are pitted against a giant computer known as EMERAC (i.e., Electromagnetic Memory and Research Arithmetical Calculator). As well it should, of course, since the movie appears to have been based on a true story. Which may be the highest honor of all, come to think of it, to be at the inspirational center of a famous Hepburn-Tracy vehicle when you yourself are only forty years old. That's really quite a thing. So, here's to you, Betty Holberton! We computed six cases of today's typo in OhioLINK, and 220 in WorldCat.

(Glen Beck and Betty Snyder program the ENIAC in building 328 at the Ballistic Research Laboratory in Philadelphia, circa 1947 to 1955, from Wikimedia Commons.)