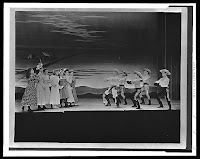 It's not so much that Donald Trump (or his hired tweeter) can't spell the names of the places he's stumping in. It's more that he won't. So far, he's managed to mess up Wichita, Kansas, Tulsa, and Oklahoma, rendering them, if you must know: Witchita, Kanasas, Tusla, and Oaklahoma. The song "Oklahoma" (from the play and Broadway musical of the same name) was made the official state song of Oklahoma in 1953. According to Wikipedia: "The lyric, which briefly depicts the Midwestern twang phonetically, describes the landscape and prairie weather in positive language. It further emphasizes the wholesome aspects of rural life, and the steadfast dedication of the region's inhabitants, against the overtly stated formal backdrop of the territory's impending admission to the Union in 1907." The Donald might be described in somewhat similar terms, minus the sincerity and attention to detail; hopefully, come next spring, we won't be feeling the need to start applying to other Unions. I'm not sure which number from the soundtrack of Oklahoma! best characterizes the Donald Trump campaign: "All Er Nuthin"; "Pore Jud Is Daid"; "I Cain't Say No"; or given his recent pissing contest with the rest of the Republicans-for-president guys, "People Will Say We're in Love." There were six examples of today's typo found in OhioLink, and "too many records found in your search" in WorldCat.
(Scene from Oklahoma, 1943-1944, Theatre Guild production, from Wikimedia Commons.)