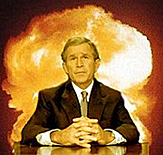 If the president goes "nuke-yoo-lar" one too many more times, we may ultimately end up seeing it listed as an alternative pronunciation in the next edition of Webster's, but for now it is still a mockable solecism. In any event, and regardless of how one pronounces this word, there remains only one way to spell it. An inspection of OhioLINK unearthed evidence of incorrectly spelled nuclear proliferation: Nuclar (nine times), Nucler (five times), and Nuculear (once). Nucular also appeared on two records, but is clearly a deliberate misspelling in the book Going Nucular: Language, Politics, and Culture in Confrontational Times, by Geoffrey Nunberg (see his fascinating "Fresh Air" commentary). (Drawing of our pronunciation "decider" from the Greenpeace web page entitled "Abolish Nuclear Weapons.")

If you haven't featured "unknown" yet, I recommend it. The initial character string "unk" is almost unknown otherwise, at least in name and address fields, which is where I encounter it routinely.