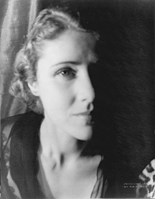 OhioLINK contains 13 cases of Clare Booth Luce, five of Claire Boothe Luce, two of Claire Booth Luce, and one of Clair Boothe Luce. Clare Boothe Luce is rather fun to say—kind of like John Wilkes Booth, but on a happier note. (Note the different spellings of Boothe and Booth). Ms. Luce clearly believed in the power of the voting booth; Mr. Booth apparently did not. In addition to being a congresswoman, ambassador, and social activist, Luce was the author of the Broadway play The Women, which was made into a marvelous movie in 1939 and is now sadly sullied, say some, by the remake currently in release. John Wilkes Booth hailed from a family of thespians and, as an actor in the mid-19th century, was very popular. In fact, he killed. I did not find any typos for his name, but it shall always be mud tracked on the stage of American history.

(Portrait of the lady by Carl Van Vechten, from Wikimedia Commons.)