"Movies are a complicated collision of literature, theatre, music and all the visual arts," according to the Australian cinematic philosopher Yahoo Serious. Film buffs of a certain age are likely to remember the date September 30 as the date that James Dean's car suffered a fatal collision on the way to a car race in Salinas, California in 1955. Reportedly, his last words were something like "That guy will stop." We were looking for some form of collision to use on this date but did not see one, so we went shopping in OhioLINK and found a staggering 300+ hits for Collison. This would have made it a candidate for the highest level of erroneousness at our page "Typographical errors in library databases." Typos w 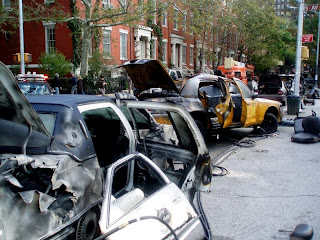 ith more than 100 hits in OhioLINK are few and far between. However, when we turned this in to the listkeeper, we were informed that most of those hits were legitimate names, so Collison only rates a 'C.'
Today's photo looks like a 20 car collision, but it was actually a made-up event in Greenwich Village for the filming of the Will Smith movie "I am legend.' The original can be seen at
http://www.pbase.com/image/90448959
Posted by librarytypos at 1:46 PM