"Just specimens is all New Hampshire has,/ One each of everything as in a show-case/ Which naturally she doesn't care to sell." So wrote Robert Frost. Speciman is interesting because, at first glance, it seems to be a word that is present on our list because people have trouble spelling it. This is not borne out in Google where the correct spelling outnumbers the typo by about 250 to one. Speciman is found on the C, or moderate probability, list in our website "Typographical Errors in Library Databases" at http://faculty.quinnipiac.edu/libraries/tballard/typoscomplete.html . Checking in WorldCat this morning, we found nearly 200 hits for "Speciman," including three different editions of Walt Whitman's "Specimen Days in America." This made us wonder if Whitman himself made the typo, but that turns out to be false. Once again, we would like to emphasize that no record should be changed without inspecting it for context. The typo may be in the original and noted with a 'sic.' 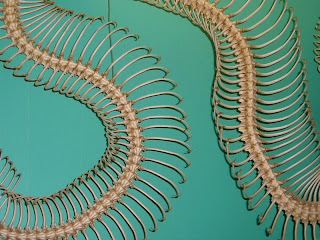 Today's photo shows the skeleton of a snake at the Smithsonian Natural History Museum in Washington. The original can be found at http://www.pbase.com/terryballard/image/34138161
Posted by librarytypos at 5:36 AM