"If man had created man he would be ashamed of his performance," according to the ever-quotable Mark Twain. Peformance for Performance breaks with the usual pattern found in most missing letter typos in that the omission is at the beginning of the word. Even so, when we first saw it we had to do a double take to find what constituted the error. That is not the case with "Peform" which is very easy to spot. There were only 3 Peforms in OHIOLINK this morning, but nearly 40 Peformances. That explains why the error is found on the B section of Typographical errors in Libary Databases at http://faculty.quinnipiac.edu/libraries/tballard/typoscomplete.html , which means that the 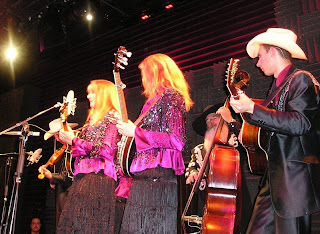 error was present in more than 15 records in OhioLINK at the time of its discovery. This morning, there were more than 1 million Peformances in Google. That sounded like a lot until we found out that the word was spelled correctly more than 750 million times.

Today's photo shows the wonderfully talented bluegrass band Cherryholmes performing in New York City in 2006. The original can be seen at
http://www.pbase.com/image/61482730
Posted by librarytypos at 7:44 AM

And I found one case (our OPAC) where Peform was for Reform.