"It is an ugly city, a dirty city. Its climate is a scandal. Its politics are used to frighten children. Its traffic is madness. Its competition is murderous. But there is one thing about it-once you have lived in New York and it has become your home, no other place is good enough." This was written by John Steinbeck. A hundred years before that, a young Samuel Clemens, traveling as a journeyman typesetter wrote his sister: "I have taken a liking to the abominable place." In every movie I've ever seen located on the streets of Manhattan, you can't go 10 seconds without hearing sirens from ambulances and fire trucks. As I write this from my 7th floor office on Worth Street, I can testify that this is something that is only true in movies. I could go on, but I do need to get down to business here. It's not hard to see how this typo occurred. 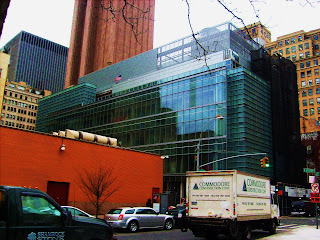 Someone was in such a hurry that they neglected to add a space. This is found in the B, or high probability section of Typographical Errors in Library Databases. This morning, there were nearly 50 hits for newyork in OhioLINK. There is a good chance that newyork is in your catalog even if your library is in Nevada.

Today's photo shows a new building being constructed at Leonard and West Broadway in Tribeca. Later this spring, it will house the library where I work. It is the first stop in a blogging and geotagging project that I've begun to photograph every block in Manhattan and add each shot to Google Earth. At my age, it's a race against the clock. The original can be found at
http://www.pbase.com/terryballard/image/109668714
Posted by librarytypos at 6:16 AM