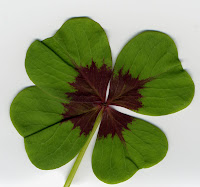 Today is St. Patrick's Day and 'tis sure to turn up a few patsies crying in their beer, without any green. (Partying like it's 2009.) We also just passed the Ides of March and are fast approaching April Showers and Tax Day. Who knows, perhaps you'll get lucky and stumble upon a pot of gold at the end of a rainbow. Symbolizing good fortune, today's graphic is the "four-leaf clover," that rare configuration of Trifolium or "shamrock"—the trademark of Ireland itself. The green-wearin' Girl Scouts of America (resembling nothing so much as the "wee folk" of Celtic legend—elves, leprechauns, and brownies) have adopted the "trefoil" as their own symbol. In 2007, we blogged the typo Partrick for Patrick, but have since found a couple of other variants in OhioLINK: Partick with 22 hits and Patick with seven. Here's hoping the next fiscal year finds you in the clover, which is to say "living a carefree life of ease, comfort, or prosperity." (But, if not, remember the "luck of the Irish" and stock up on potatoes.)

(Scan of a four-leaf clover at 600 dpi "for an international digital herbarium," from Wikimedia Commons.)