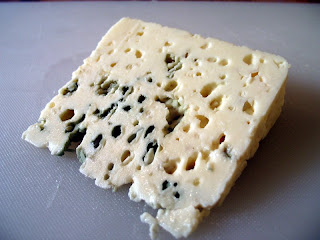 Right before leaving the White House, Dubya managed to pull off one last-gasp galling gallophobic maneuver. He effectively banned the importation of Roquefort cheese by placing a punishingly high tariff on it in order to get back at the French for spurning our own specialty, hormone-riddled beef. There were 27 cases of Tarrif* exported to OhioLINK, which makes it a "high probability" typo on the Ballard list. Fortunately, Mr. Obama likes fromage and the French and, unlike Bush, isn't cheesed off at them for being sharper and more sophisticated than we are and not supporting the war in Iraq. The current president even had a domestic cheese named after him back in 2007: the Barick Obama, made by Lazy Lady Farms in Westfield, Vermont.