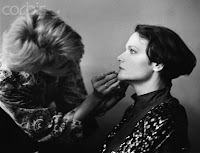 Anne Waldman (whom I had the pleasure of meeting during a recent seminar held here at the University at Albany) is a child of the sixties and now in her sixties: she's been called the "spiritual wife of Allen Ginsberg" and the "Youngest Beatnik." There are 11 instances of Beatnick* in OhioLINK, some of which are probably spelled like that on the original, but really shouldn't be. According to Answers.com: "The word 'beatnik' was coined by Herb Caen in an article in the San Francisco Chronicle on April 2, 1958. Caen coined the term by adding the Russian suffix -nik, after Sputnik I, to the Beat Generation." Waldman is a poet, teacher, and disciple of Buddhism and very likely did not give events like the Venice, California, Miss Beatnik Contest of 1959 too much notice—although if she had, she could have definitely given these cool kitties a run for their money.

(Anne Waldman experiencing "Make-up on Empty Space" for the premiere of Oh! Oh! Plutonium. Photograph by Allen Ginsberg, 1984, from the Corbis website.)