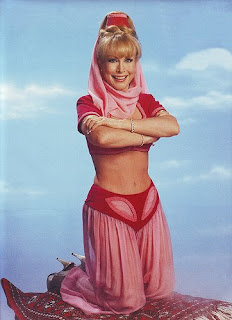 In the late 1960s, many a TV watcher dreamed of Jeannie with the bright blonde hair, blinking blue eyes, and clinging harem pants: "Yes, master?" "I Dream of Jeannie with the Light Brown Hair" was written by Stephen Foster in 1854, but gained enormous popularity during the ASCAP strike of 1941 when a lot of songs couldn't be played on the radio due to licensing disputes. "Jeannie," however, was in the public domain. According to Time Magazine: "So often had BMI's Jeannie With the Light Brown Hair been played that she was widely reported to have turned grey." There are nine cases of Geniune for genuine in OhioLINK (and one case of Geniue for genuis: a review by Eudora Welty of Arthur Mizener's The Saddest Story: A Biography of Ford Madox Ford). It doesn't take a genius to see that these are typos of "moderate probability," but it may take a bit more effort than rubbing a magic lamp or opening a bottle of peroxide to eradicate them.

(Barbara Eden as Jeannie the genie, courtesy of Flickr.)

Carol Reid
Posted by librarytypos at 3:00 AM