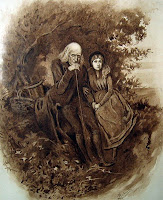 There are three occurrences of Personell in OhioLINK and two of Personnell. You may also find a quite a few hits for Personel (we found 43, but a number of them turned out to be foreign words or surnames; some were also typos for personal). Little Nell is a person in the Charles Dickens novel The Old Curiosity Shop, but today's typos are no curiosities. Words with two sets of consonants are quite often misspelled (misspell itself being a good example). The website Absoluteastronomy.com writes: "Probably the most widely-repeated criticism of Dickens is Oscar Wilde's remark that 'One would have to have a heart of stone to read the death of little Nell without dissolving into tears ... of laughter.' (In fact there is no such scene, since Nell's death takes place off stage.)" Do your own behind-the-scenes work and fix any typos you find for the word personnel in your catalogs.

(Little Nell and Her Grandfather by Fred Barnard, circa 1870, from Wikimedia Commons.)