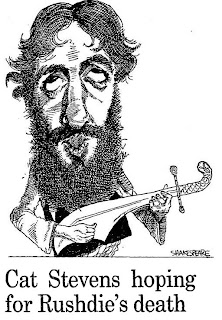 Cats usually like salmon, but it was pretty clear twenty years ago that Cat Stevens (who by that time had renamed himself Yusuf Islam) did not like Salman Rushdie. He basically endorsed the Ayatollah Khomeini's death threat fatwa against the writer, saying that while he didn't feel personally obliged to carry it out, he'd be all in favor of someone else doing so. Islam later tried to backpedal and claimed that his "dry [British] humour" was the problem and that he was being misunderstood and persecuted for his innocent remarks. This broke the hearts of many former Cat Stevens fans, of which I was very much one, especially given the role his music played in one of my all-time favorite movies, Harold and Maude. There are six instances of Salmon + Rushdie in OhioLINK, but one record correctly includes the names Salman Rushdie and Christian Salmon. (WorldCat contains 20 records with this typo.) Although it's only a vowel, there is a big difference between salmon and Salman—just as there is between "Peace Train" and pietism, Stevens and Islam, Islam and insanity.