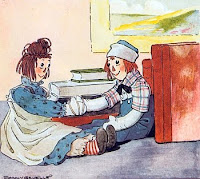 Johnny Gruelle, who was born in 1880 in Arcola, Illinois, wrote both "Raggedy Ann" and "Raggedy Andy" books, and books with both Ann and Andy, and books with neither Ann nor Andy. And then, of course, there were the dolls themselves, which many of us dragged around as children, whether we had actually read the books or not. As a matter of fact, the dolls were based on a rag doll that Gruelle had made for his daughter Marcella and then later patented and saw mass produced. The books followed three years later in 1918. When Marcella died of complications from a smallpox shot at the age of 13, a heartbroken Gruelle couldn't bear any reminders of her save for the Raggedy Ann doll he kept close at hand. Some critics consider these books to be "thin gruel" (thanks, S!), but the stories were really just connective tissue for the beautiful drawings—of which the author felt so sure that he was known to ink them directly onto paper without troubling to sketch them out in pencil first. There were 51 cases of Annd in OhioLINK this morning, which makes this a typo of "high probability."
(Raggedy Ann & Raggedy Andy meet for the first time, in the Project Gutenberg EBook of Raggedy Andy Stories by Johnny Gruelle, from Wikimedia Commons.)