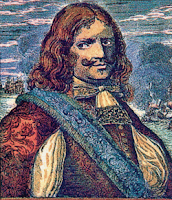 The buccaneers were pirates who lurked off the coast of South America and the Caribbean in the 17th century. Surprisingly, these ruthless men actually had their own complex system of rules. Their captains were elected democratically, they shared plunder equally, and they developed complicated systems of insurance for men who became injured.

The word buccaneer actually comes from the French boucan, which is a grill used for smoking dried meat used at sea. The term buccaneer is now used to describe any unscrupulous or cutthroat person, particularly in politics and business.

Buccaneer, like many words with repeating letters, is a tricky one to spell—I always want to add an extra N, and our typo for today has left out the second C. Bucaneer* occurs 4 times in OhioLINK and over 75 in Worldcat.

(The coloured woodcut pictured here is of Sir Henry Morgan, one of the most famous buccaneers, taken from pirates.wikia.com.)