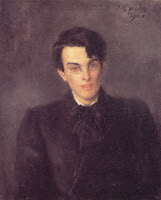 Happy Birthday, M! Today is also the birthday of John Butler Yeats, 19th-century Irish painter and father of the poet William Butler Yeats. There are 35 occurrences of Bulter (presumably all typos for Butler) in OhioLINK; a search on Bulter + Butler finds 18. The elder Butler Yeats was both formative and supportive of an artistic bent in all his children. William's brother Jack had a successful career as a painter and his sisters "Lily" and "Lolly" were involved in the Arts and Crafts Movement. John Yeats personally paid for a 100-copy print run of his son's first publication, Mosada: A Dramatic Poem, in 1886. In 1923, William was awarded the Nobel Prize in Literature, which afforded him the money to finally pay off his debts, along with those of his father. (I'm not sure whether the Yeatses had butlers, but it does seem like they had a nice father-son relationship.) At the age of 69, John moved to New York City where he knew some painters in the "Ashcan School." He is buried in Chestertown, New York.