Kelly + Kelley (for Kelly or Kelley) 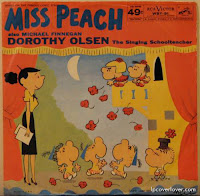 Mell Lazarus, creator of the comic strip "Miss Peach," named his cartoon classroom the Kelly School after his hero Walt Kelly ("Pogo"). Lazarus, who was a member of Mensa, knew that there was more to a good education than rote learning and the "Three R's" and spent 45 years drawing that conclusion. Miss Peach's pupils (Marcia, Ira, Arthur, Francine, Freddy, and the rest) were often concerned with weightier issues than spelling, but the name of their school is a tricky one, if the 245 hits on Kelly + Kelley in OhioLINK are any measure. Although not all of those records contain the discrepancy in question, a sufficient number do, projecting this as a typo of "highest probability" on the Ballard list. Lazarus clearly enjoyed puns, naming the Kelly School principal "Mr. Grimmis" and the gym teacher "Mr. Musselman." He was accorded the National Cartoonists Society's Humor Comic Strip Award for 1973 and 1979 and the Reuben Award for Outstanding Cartoonist of the Year in 1981. He even managed to get "Miss Peach" pulled from syndication on November 29, 1963, with a strip in which one of the characters fantasizes about saving the president's life. (The strip in question was created shortly before the JFK assassination.)