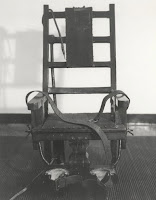 On June 24, 2004, the death penalty, or "capital punishment," was ruled to be unconstitutional in New York State. Wikipedia tells us that "the term capital originates from Latin capitalis, literally 'regarding the head.' Hence, a capital crime was originally one punished by the severing of the head." Fashions fluctuate in the world of execution. From head severing to hanging, electrocution to "lethal injection"—even shooting is making a comeback. However, as Dorothy Parker once pointed out, in a somewhat different context: "Razors pain you, rivers are damp, acids stain you, and drugs cause cramp. Guns aren't lawful, nooses give, gas smells awful ... you might as well live." Excution* lives six times in the OhioLINK database. The typo Executin turns up twice and Exeution* only once, but you know what they say, three strikes and you're in.