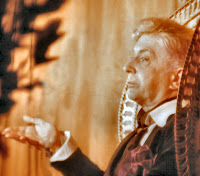 Quentin Crisp, who passed away in 1999 at the age of 91, was a cottage industry unto himself. A latter-day Oscar Wilde, Crisp made the most of his undeniable homosexuality and flamboyance in a time and place it was illegal to be gay. For the most part eluding steady employment, other than as an artist's model ("it was like being a civil servant, except that you were naked"), Crisp became widely known as an eccentric, possibly listing "raconteur" and "flâneur" on his resume (had he in fact felt the need of one, which it doesn't appear he did). He's the author, most notably, of The Naked Civil Servant (1968), as well as a dozen or so other memorably titled books, such as Love Made Easy, How to Have a Life Style, How to Become a Virgin, Manners from Heaven, and How to Go to the Movies. His final work (a collection of writings including his poetry and script of a one-man show) was supposed to be called Dusty Answers, but it has yet to be published. I like that title, though, as I once sent him a question about dust, and received an interesting answer! I was sure I had read something where he compared the look and feel of long undisturbed dust to an exquisitely soft grey blanket. In an effort to locate the precise quotation, I visited the Quentin Crisp website, where I discovered to my amazement that I could email the sultan of sloth directly. He promptly replied, claiming that he had "no notion" of that to which I referred, but advising me to freely "quote" him in any manner that would increase his "reputation for outrage." He helpfully added: "Mr. Sitwell says dust is insatiate and invincible." Famously averse to housework, Crisp did admit in his memoir: "After the first four years the dirt doesn't get any worse." Not sure how long it's been since OhioLINK was dusted, but I found 62 instances of Industi* and 15 of Industy lurking there this morning.