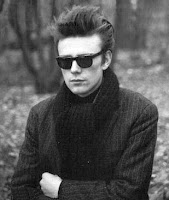 Stuart Sutcliffe, who's sometimes referred to as the "Fifth Beatle," was born seventy years ago today in Edinburgh, Scotland. He was the original bass player for the Beatles, whose shifting name he and John Lennon had contrived in a tribute to Buddy Holly and the Crickets. (In addition to "Beetles," they also tried spelling it "Beatals," which puts me in mind a little of the hilarious Powerpuff Girls episode "Meet the Beat Alls"). Sutcliffe died of a brain hemorrhage in 1962, after having been with the band for only fifteen months. Had he lived, however, the "Lost Beatle" would likely be better known for his paintings than his music. While performing with the Beatles in Germany, Sutcliffe met photographer Astrid Kirchherr, to whom he later became engaged. He quit the Liverpool band in 1961 to enroll in the Hamburg College of Art, where he studied under future pop avatar Eduardo Paolozzi. Sutcliffe had already garnered a solid reputation as an artist when he was suddenly lost to the world at the tender age of 22. Today's typo (Fith for fifth) seems to have also lost one of its original five members. It was found 13 times in OhioLINK.

(Portrait of Stuart Sutcliffe from the Web.)