Gordan + Gordon (for Gordon or Gordan) 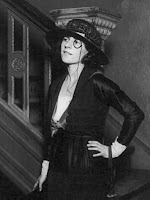 Tiny Ruth Gordon was a very big hit as the daffy, life-affirming "Maude" in the 1971 cult film Harold and Maude (co-starring the much younger and more jaded Bud Cort), as well as the nosy neighbor and mousse-producing satanist in the 1968 film about a cult called Rosemary's Baby. But the truth is that Ruth had been proving herself on both stage and screen for quite some time before that. Born in 1896 in Quincy, Massachusetts, Gordon collaborated with her husband, Garson Kanin, on such Tracy-Hepburn vehicles as Adam's Rib and Pat and Mike. (The screenwriting pair chose to make the latter film in order to showcase their friend Kate's impressive talent at golf.) Gordon also wrote the script for the autobiographical film The Actress, starring Spencer Tracy and Teresa Wright. I haven't watched that one yet, but another strange and wonderful Ruth Gordon flick I did just see is called Lord Love a Duck, made in 1968, with Roddie McDowell and Tuesday Weld. It's quite an amazing film and rather hard to describe. Catch it if you can. And try and catch today's combination typo wherever you can find it too. There were 35 cases in OhioLINK (a handful of sics, i.e.'s, and true instances of two different people), but the vast majority of records found revealed a misspelled Gordon or Gordan.