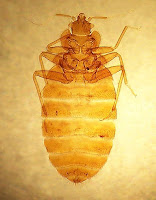 These days you can’t listen to the news or pick up a paper without hearing about the return of bedbugs. These nighttime nasties are on the rise in cities from coast to coast. Two commonly-cited factors in their resurgence are the ban on the pesticide DDT and the increasingly mobile nature of our society.

Once introduced to a home, bedbugs are tricky to get rid of. On top of the bites, itching, and possible allergic reactions, those infested also have to deal with the stigma. No one wants to invite Johnny over to play if Johnny’s house is crawling with bedbugs! The old bedtime rhyme “Sleep tight, don’t let the bedbugs bite,” which has always seemed like such a quaint anachronism, could now become the stuff of nightmares for a new generation of children.

Fortunately, the lowest-probability typo Retrun* (unlike bedbugs) doesn’t seem to be making a comeback. There are only 2 instances of it in the OhioLink database, where they’ve been confined to contents notes.