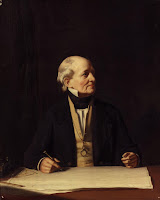 What's the weather like out, folks a couple hundred years ago, just like those of today, would ask. And the answer, my friend—according to Irish-born hydrographer Sir Francis Beaufort—was blowing in the wind. Like many great innovators, Beaufort had found his calling at an early age: when he was 15, he was shipwrecked on account of a faulty nautical chart. In Scott Huler's book Defining the Wind: The Beaufort Scale, and How a 19th-Century Admiral Turned Science into Poetry, we learn the original scale included such whimsical descriptions as "smoke rises vertically," "wind felt on face," "small trees in leaf start to sway," and "chimney pots and slates removed." It has seen many modifications over the years, such as Michael Green's satirical The Art of Coarse Sailing, in which various-force winds manifest as "cigarette smoke gets in eyes," "beer froth blows off," "elderly customers have difficulty in leaving pub," and "coarse sailor hit by falling sign." Today's typo is a real beaut as well and turns up, like a trembling leaf on a tree branch, 14 times in OhioLINK (note: not all of these are typos for beau*) and 328 times in WorldCat. It ranks as a "moderate probability" typo on the Ballard scale.