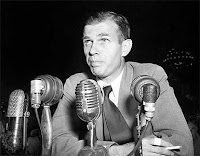 On today's date in 1948, the House Un-American Activities Committee held the first congressional hearing ever aired on television. Known as "Confrontation Day," it consisted of contradictory testimony by former Communists and Soviet spies Alger Hiss and Whittaker Chambers. The former had been a lawyer, author, and government official involved in the establishment of the United Nations. Hiss was not actually charged with espionage as the the statute of limitations had run out; however, he was charged and convicted on two counts of perjury. (Chambers was a cooperating government witness, so no charges were brought against him.) Although the hearing was held on a day of "infernal heat," twelve hundred spectators were admitted and scores of others gathered outside. Only one in ten Americans had ever watched a television program, but millions tuned in to this dramatic and divisive hearing. Whether or not Hiss was truly a spy is debated to this very day. His story may not be uncovered for a couple of decades, though, since HUAC's records were sealed in 1976 for another fifty years. The typo Hisstor* was discovered ten times in OhioLINK (including one possible antiquated spelling from 1744 and one publisher name: HisStory) and 66 times in WorldCat.