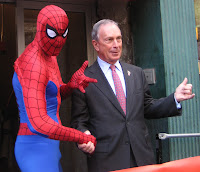 New York City mayor Michael Bloomberg is one of the largest charitable givers in the world, having donated "$235 million to more than 200 organizations promoting education and health" in 2008 alone. Bloomberg is clearly not a chary man. According to the New York Times, Hizzoner plans to ultimately part with nearly his entire fortune, saying that "the best measure of a philanthropist is that the check to the undertaker bounces." As generous as Bloomberg is with his money, he is just as unguarded in his speech. In a 2001 article in New York Magazine entitled "Chairman Mike," the "charismatic CEO" is reported to have boldly issued such politically incorrect statements as: "If women wanted to be appreciated for their brains, they'd go to the library instead of to Bloomingdale's." Ouch. And yet his broadminded, Big Apple constituents loved and forgave him. And elected him. Three times. We got 35 hits on today's typo in OhioLINK, and 643 in WorldCat.