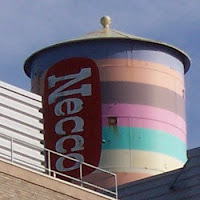 There are many necessities of life and, while memories of candy consumed as a kid may not actually be one of them, they often seem to be compelling components of a satisfied adulthood. Necco Wafers are a strangely muted confection that I still can recall, although I haven't had one in decades. They came stacked in a waxy plain paper wrapper and an assortment of "flavors" that all tasted sort of similar, despite the variability of their pale, dusty colors. I particularly liked the chocolate ones. Apparently, Necco-ish wafers have been around since 1847, when they were made by Chase and Company of Massachusetts. The candy was "incorporated under its current name in 1901" and began to be widely advertised as "Necco Wafers" in 1912. In 2009, "New Necco Wafers" were rolled out as a more "natural" alternative to the original. The new line also improved on the old chocolate variety ("previously," says Wikipedia, "a vanilla flavor with a hint of chocolate flavoring") by giving it a "more intense all-cocoa flavor." It even now comes in a four-flavor assortment: mocha, white chocolate, milk chocolate, and dark. Wow, maybe Neccos are a necessity after all! There were 64 cases of Necces* found in OhioLINK today, and a whopping 1,235 (sugarly, I mean surely, not all typos) in WorldCat. You won't necessarily find this one in your own library's catalog, but I'm willing to stick my neck out and bet you a case of wafers that you will.

P.S. I've been informed that a segment on NPR's "Wait, Wait ... Don't Tell Me!" featuring Neko Case revealed the fascinating fact that Necco Wafers were among the rations given to Union soldiers during the Civil War.

(Necco water tower, painted in 1996 to look like a roll of Necco Wafers, Cambridge, Massachusetts, 2004, from Wikimedia Commons.)/span>