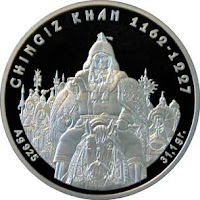 The mighty Genghis Khan was the grandfather of Kublai Khan, the eponymous subject of the Samuel Taylor Coleridge dream-poem that begins, "In Xanadu did Kubla Khan a stately pleasure dome decree..." and then just gets better from there. In the twelfth century A.D., Genghis Khan showed great agency in the founding of the Mongol Empire, which became the "largest contiguous empire in history after his demise." Perhaps the most resonant words in the vibratingly vivid Kubla Khan are those recurring "sunny pleasure domes with caves of ice," which& appear to be reflected in the beautiful Kazakhstani coin pictured above. Whether you work for a stately government agency or a more privately owned dome of pleasure, you can always extend its empire a little bit further by keeping your typos in check. Agengy was found 16 times in OhioLINK, and Agengies twice, whereas WorldCat turned them up 89 and 20 times apiece.