Scared + Sacred (for Sacred or Scared) 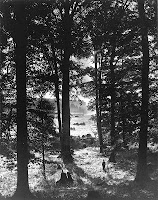 I was reading an account recently of a young girl's supposed encounter with a sasquatch (aka bigfoot) at an Oklahoma summer camp in 1977. She wrote that prior to the incident she had been lying awake in her cabin because she was "sacred of thunderstorms." Clearly, she meant scared, but apparently a little thunder and lightning were the least of her worries that night. It's often said, "Is nothing is sacred?" but in fact there are many things dubbed thusly, notwithstanding our often secular society: everything from sacred texts and sacred cows to hearts and flowers, dogs and cats, birds and bees (or close enough), and even such seemingly sacrilegious things as performance artist/sex worker Annie Sprinkle's Neo-Sacred Prostitute. While searching for today's typo in all the wrong places, I came across a poem by the Palestinian-American poet Naomi Shihab Nye called "Scared, Scarred, Sacred," which I suspect is how most of us tend to go through life. Regardless of wherever we happen to be, existence is really just one great big unknown. Or as another title I turned up would have it: Wilderness: Scared of the Sacred. There were 27 cases of Scared + Sacred in OhioLINK this morning, 18 of which involved legitimate errors. WorldCat returned 207 matches; presumably 100 or so of these were typos for either sacred or scared. Today's picture is of the scary/sacred spot in western New York where Joseph Smith, the Mormon prophet, claims he had a vision. Interestingly enough, Utah is a hot spot for both Mormons and Bigfoot sightings.

(Photograph of the Sacred Grove, where Joseph Smith, Jr. had his first vision in 1820, by George Edward Anderson, circa 1907, from Wikimedia Commons.)