Eliane + Elaine (for Elaine or Eliane) 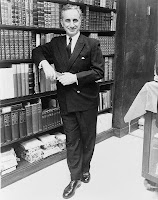 I probably shouldn't like Elia Kazan. After all, he "named names" to the House Un-American Activities Committee and I'm so not down with that. I love folks who fearlessly stick up for the First Amendment and the right to freely "associate." I also have a bit of a soft spot for those fun-loving pre-Stalinist so-called "Commies" like Woody Guthrie and Jessica Mitford. I even maintain a tenuous connection to one of the Hollywood Ten. (Very tenuous.) Nevertheless, I do like Elia Kazan. His films (A Streetcar Named Desire, On the Waterfront, East of Eden, Splendor in the Grass, Gentleman's Agreement, Death of a Salesman, etc.) are truly extraordinary; and while it's hard to say whether his actions before the committee were motivated out of ideological principle, the irresistable desire to keep on working, a personal betrayal of sorts, or some combination thereof, there's something in it that begs for respect. And more than half a century later, Hollywood (though there remained a handful of stone-faced dissenters) appears to have felt the same way. Kazan was accorded an honorary Oscar for lifetime achievement in 1999; Stanley Kubrick called him "the best director we have in America"; and Martin Scorsese made an admiring documentary called A Letter to Elia in 2010. Despite the divisive politics of the 1950s, the controversial director's body of work (its essential liberalism and humanity) speaks for itself. There were 20 instances of today's typo in OhioLINK and around 200 in WorldCat. (Searching on Eliane alone may bring up some misspelled instances of Elaine as well, but that can be a properly spelled name in its own right. There were 526 cases of Eliane in OhioLINK and "too many records found for your search" in WorldCat.)