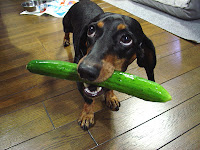 Are you a consumer of cucumbers? I like the phallic-looking veggies well enough myself, but I used to eat more of them when I lived with several roommates who all enjoyed tossed salad for dinner. At the time, we also shared quarters with a clowder (!) of cats and I would notice that whenever I peeled cucumbers, my sweet little feline Alfalfa would quickly come running. I finally offered him a plate full of cucumber peels to see if he would put his money where his mouth was. He did. I actually had to intervene after a few minutes since I didn't want him to end up with a distended belly full of green wax and fiber. Cucumber is a gourd, originally from India, and today comes in a wide variety of cultivars. One is even officially called "Burpless," implying that here's a cucumber that won't give you gas. I never actually had to burp my cuke-craving kitty, but I probably could have if I had wanted to. One of his most amazing qualities was his ability to hang upside down, or draped over my shoulder, completely relaxed, like a rag doll. Here's to the awesome Alfalfa as well as the totally cool cucumber. There were two of these in OhioLINK this morning, and 23 in WorldCat. A "low probability" typo on the Ballard list, this one is a relatively easy pickle to get out of.