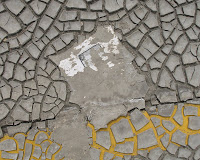 Silt is like very soft sand. It's almost like powder. Unlike powder, however, certain kinds of, let's just call it dirt, can actually be good for your skin, especially your face. The Aztecs thought that clay had healing properties; Cleopatra collected it from the River Nile; and Pliny the Elder extolled it in his ground-breaking work Natural History. The early Romans and Germans employed it therapeutically, and pioneering 19th-century naturopaths like Sebastian Kneipp vigorously promoted its use. The Japanese bathe in hot outdoor mud springs, which sounds like one of the best ways to combine childhood and adulthood that I've heard of in a very long time. Of course, a little research and caution are always called for before indulging in any type of facial, but clay is considered a good way to go if you want to draw out the toxins. Facilities are set up for this sort of thing (day spa, anyone?), but it can be done with equal facility right at home. And if not exactly dirt cheap, with far less impact on your pocketbook. Check out your local health food store for the best types of therapeutic clay. (Some kinds can even be taken internally.) Facilt* was dug up 39 times in OhioLINK, and 902 times in WorldCat.