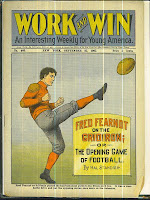 I don't follow most sports, so I probably tend to stereotype athletes and the games they play even more than most people do. At their (or perhaps my) worst, I tend to think of football players as muscle-bound, brain-damaged, steroid-addled bruisers, and their fans as beer-swilling, wife-beating, out-of-shape couch potatoes. A collection of angry tweets yesterday unfortunately painted them as outrageous racists to boot, after NBC had the temerity to interrupt the first quarter of last night's 49ers-Patriots game in order to air President Obama's address to the nation about gun violence and the mass murders at Sandy Hook Elementary School. So yes, sports fans can certainly act dreadfully in lots of different ways, but even though disaffected hipsters pretend to prefer European-style soccer over all-American football, we don't even come close to the "hooliganism" that is how some soccer fans choose to express their enthusiasm. That said, and I hope you'll forgive my blatant stereotyping, I'm kind of pumped to say this one is a "high probability" typo on the Ballard list, turning up 76 times in OhioLINK, and 976 times in WorldCat.

(Cover of Work and Win: An Interesting Weekly for Young America, September 27,1907, from Wikimedia Commons.)