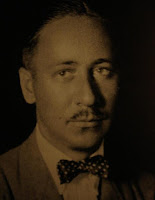 In 1998, staff at the Central Park Zoo presented a black and white case for the existence of gay penguins. Roy and Silo were two male Chinstraps who had been observed "performing mating rituals." They also tried to "hatch a rock" in 1999. Later on the pair proved capable of hatching an actual egg from a penguin who didn't seem to have the knack for it, and the resultant little one was named Tango. (I guess in this case, it took three, or technically make that four.) Tango soon followed in the waddling footsteps of her two dads and paired up with another female, known as Tanuzi. Then you've got Robert Benchley, a humorist who wrote for The New Yorker and Vanity Fair during the early decades of the 20th century. Benchley was a member of the Algonquin Round Table and an occasional movie actor. (He appeared in Hitchcock's Foreign Correspondent, among other films, and his own MGM "miniature" called How to Sleep won an Academy Award for Best Short Subject in 1935.) In 1936, he published a book of humorous essays entitled My Ten Years in a Quandary, and How They Grew (an apparent pun on the title of the popular children's book The Five Little Peppers and How They Grew). One piece was called "Penguin Feud" and concerned boon companions Admiral and Jake. These two penguins did everything together, until one day they simply stopped speaking, as it were. Before this, they had been inseparable and thoroughly compatible. Benchley even uses the word "intimate," without quite calling them gay. Though like Roy and Silo, Admiral and Jake eventually parted ways, it nevertheless makes for a heartwarming tale on a cold winter's day. We've blogged about this and related typos on one or two other occasions, but I couldn't resist a shout-out to the prescient Robert Benchley, and to all gay penguins everywhere. There were eleven examples of Pengiun* (for penguin*) in OhioLINK today, and 245 in WorldCat.