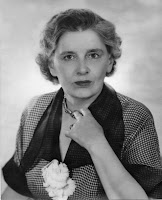 Dame Rebecca West was born Cicely Isabel Fairfield on December 21, 1892. West once wrote that "the main difference between men and women is that men are lunatics and women are idiots." She also asserted, in her novel The Judge: "Since men don’t love us nearly as much as we love them that leaves them much more spare vitality to be wonderful with." I won't presume to define her entire point of view on the matter, but it seems that men spend their lives frantically fending off one another, while women are just attractive distractions (or maybe that's distracted attractions) on the side. Okay, this was 1922, not 2012, and we've come a long way, blah blah blah, but I think we all know what she was talking about. West, who was the longtime lover of H. G. Wells and whom Time magazine called "indisputably the world's number one woman writer" in 1947, was a very funny suffragette, and she certainly wasn't the only one. Clementine Churchill, for instance, otherwise known as "One of the Doomed," wrote a letter to The Times of London in response to the opinion of an "eminent bacteriologist" who felt that women were simply too inferior to vote or participate in politics in any way, in which she helpfully wondered, tongue planted firmly in cheek: "Ought women not to be abolished altogether?" The future wife of the British prime minister (who himself opposed women's suffrage) added: "I have been so much impressed by Sir Almroth Wright's disquisition, backed as it is by so much scientific and personal experience, that I have come to the conclusion that women should be put a stop to." Canadian feminist Nellie McClung declared, in a mock debate in 1914 called "Should Men Vote?": "Oh, no, man is made for something higher and better than voting... The trouble is that if men start to vote, they will vote too much. Politics unsettle men and unsettled men means unsettled bills, broken furniture, broken vows, and divorce. Men's place is on the farm... if men were to get the vote, who knows what would happen? It's hard enough to keep them home now!" Actually, there was a fair amount of this going on at the time: sprightly confident women having sport with stuffy terrified men. When it comes to lunacy and idiocy, however, it's debatable which sex predominates. In the movie Mary Poppins, Mrs. Banks basically calls the opposite sex "stupid." In the TV show Everybody Loves Raymond, Debra mutters "Idiot!" so often, it starts to sound like a verbal caress. Nowadays, it's a cliche to portray men as simple, uncomplicated creatures—clueless, forgetful, incompetent, or out of touch. Women, by contrast, are driven crazy by such behavior, and some would say crazy to put up with it. In any case, and as always, love is blind, deaf, and dumb, and only lunatics and idiots need apply. Rebbeca (for Rebecca) was found five times in OhioLINK, and 73 times in WorldCat.