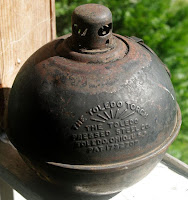 On December 26, 1928, Joseph E. Withrow and Lyman W. Close of Toledo, Ohio, filed an application with the United States Patent office for an invention called “Burner.” In essence, they had created an apparatus for use in “street torches, such as are commonly used for illuminating road obstructions, and usually referred to as construction torches,” with the purpose of “increasing the efficiency of such torches and militating against extinguishment of the torch flame.” More specifically, the goals were “to provide a burner so constructed and arranged that liability of extinguishment of the flame by high winds or by rain is reduced to a minimum” and to offer a device “which may be inexpensively manufactured.”

The patent, number 1732708, was granted on October 22, 1929 to assignee the Toledo Pressed Steel Company. Now what, you ask, has this to do with anything? Well, if you’re of a certain age, you might remember that these little kerosene smudge pots, looking for all the world like cartoon bombs, were once used throughout the United States to mark road construction projects and other hazards. They were sold under the moniker “Toledo Torch,” and as a child, I loved them. They’re no longer made by the original manufacturer, but authentic specimens can still be found for sale on eBay and other Web sites.

There are 11 instances of today’s typo Constructon* in OhioLINK, and WorldCat can lay claim to 162 entries.

(A Toledo Torch, from eBay listing)