Propery (for Property or Properly) 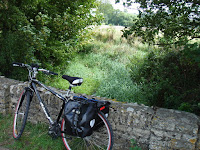 Last week during a particularly underwhelming webinar at work, I wearily propped up my head and read the following words: "Is the term a real property?" Followed by a line that read: "Is the term defined properly?" I was genuinely mystified as to whether I was witnessing an actual typo there or not. Later on, I tried searching on Propertly, but nothing came up, so I decided to omit both the T and the L—and voilà: Propery, with 22 hits in OhioLINK and 339 in WorldCat. Even though typos are considered improper by definition, there's a lot to be said for investigating them properly. In their own ungainly way, they can prove valuable property when it comes to the business of "keeping our online catalogs free of errors." I also had a hard time finding a salubrious illustration for today's posting—until I came across this one, which, despite the cold gray rain coming down outside, fills me with hope for a speedy spring.

(Before the Thames gets properly wet, on a bike ride along the Thames pathway, August 2006, from Wikimedia Commons.)