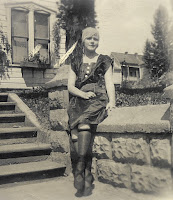 In the famous 1823 Christmas poem A Visit from St. Nicholas, the author (i.e., Clement C. Moore or Henry Livingston, Jr.) observes that "the stockings were hung by the chimney with care." In the 1975 Broadway hit Chicago, unrepentant inmate Velma Kelly declares, "I'm gonna rouge my knees and roll my stockings down." And in 1945, Japan surrenders to the Allies, and DuPont issues a press release announcing: "Peace, It’s Here! Nylons on Sale!" For many months, in what the press would gleefully dub the "Nylon Riots," American women stood impatiently in long lines, knocked down store displays, and even scratched and pulled each other's hair over what would turn out to be drastically limited stock of the heralded hosiery. (This ultimately led to an antitrust suit against the company as well.) Stockings have played an important part in our nation's history (dare I say herstory?) and the story, as they say, continues to have legs. Prior to the invention of nylons, which were rolled out to the public at the 1939 World's Fair, stockings had been made out of wool, linen, cotton, rayon, or silk. Which were itchy, baggy, difficult to get, and/or easily destroyed. Nylons were the answer to a prayer. However, during the war, all of the available nylon (Japan had stopped exporting silk) went toward the production of parachutes, airplane cords, and rope. Nylon stockings eventually made a comeback, though, and were enjoyed for another ten years or so before morphing uncomfortably into "pantyhose." And while today's girls and young women can scarcely appreciate the fact, it would be several decades more before we were finally blessed with things like organic cotton tights, Spandex, and footless leggings. Today's typo was pulled up three times in OhioLINK, and 118 times in WorldCat. Stock it to me, baby!

(Photo of a girl in "flapper" garb taken in Moscow, Idaho, in 1922, from Wikimedia Commons.)