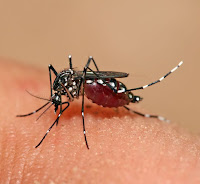 As if you needed another reason to hate mosquitoes … say “hello” to chikungunya, the latest mosquito-borne illness to reach the shores of the United States. Transmitted by the species Aedes aegypti and Aedes albopictus, the virus causes symptoms similar to those of malaria—fevers and aches and pains—but then throws in debilitating joint pain and chronic arthritis for good measure. Now, a new study published in the journal Neurology (and summarized by NPR) tells us that once people have been infected with chikungunya, they appear to be at increased risk for developing encephalitis or other central nervous system diseases. The virus is present in Africa, Asia, Europe, and the Indian and Pacific Oceans, and so far in the Americas, it’s been discovered in the Caribbean, Mexico, and the state of Florida. For more details, visit the Centers for Disease Control Web site.

It's too bad that mosquitoes are far more common than the typo Illnesss*. There were only 4 entries in OhioLINK and 44 in WorldCat.