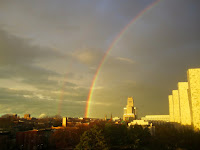 Due to the Coincidental Law of Crossword Puzzles, I recently encountered two or three clues for the answer ARCUATED, a word that means "having arches; curved or bent like a bow." I saw a rather stunning example of this last weekend when a perfectly formed double rainbow descended upon a rain-drenched Albany, amid a gorgeous greenish-yellow-lit backdrop. While I didn't notice a pot of gold, a wizard, or any Munchkins loitering nearby, there is in fact a "Yellow Brick Road" just south of the city, near the Normanskill Creek, and it seems as if it might have even been named for the famous L. Frank Baum site itself. Although as one AOA blog reader commented: "Yellow brick roads are actually very common in the Hudson Valley. Most of them just happen to be underneath asphalt now. Some remaining examples of other yellow brick roads are DeGraff Street in Schenectady and the alley in Troy just off Washington Park. Yellow bricks were manufactured in many local places like Mechanicville and Ravena." He adds: "The creator of the Wizard of Oz was manufactured around here, too! L. Frank Baum grew up in Chittenango, New York, and appeared on stage a few times in Troy during his failed career as an actor. So the Yellow Brick Road in the Wizard of Oz was more likely inspired by the yellow brick roads in the Hudson Valley ... not the other way around." I know a photographer who happened to have only black and white film in his camera when he took a shot at this beautiful rainbow last week. Considering the ephemeral and quasi-translucent nature of such things, I wonder if it will even show up when he develops the roll. The whole thing reminds me of the time a young companion was watching an old movie with me and suddenly asked: "Was the air black and white back then?!" Well, no, but I'll put it in black and white to you right now: There were 39 cases of this typo seen in OhioLINK today, and 1,011 in WorldCat.

(Photo of rainbow, arcuated over the Empire State Plaza, taken by a different friend.)