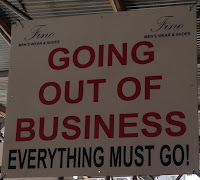 This isn't exactly a typo, but apparently an amusing mondegreen by someone commenting on an article about the health benefits of walking: "The company next store [sic] pays to have a van shuttle its employees that 150 yards..." Or at least that's what I thought it was at first. A more level-headed coworker, though, has since convinced me that there could be any number of explanations. The writer could have accidentally typed SOOR, for example (the S and the D are right next to each other on the keyboard) and AutoCorrect could have changed it to store. Or maybe the company next door was a store. It could have just been one of those mental glitches that occur at times when you're not really paying attention. He found it "far-fetched," he said, to think that this person would think "next-door neighbor" was really "next-store neighbor" and I think he's probably right. I often find myself substituting one homonym for another, or writing something like that instead of what, etc. There is even this weird phenomenon whereby a normally competent writer will temporarily find herself at a loss to remember how to spell the simplest of words. So let's not call the van (to the funny farm) just yet. Because who knows what's in store? Wordnesia could be living right next door. In any event, it's all fodder for the typo blog! We found 16 examples of Stror* in OhioLINK today, and "too many records found for your search" in WorldCat. Some of these turned out to be correctly spelled personal names and foreign words, so be certain to verify any of that kind you might come across before fixing them. You can also try searching separately for typos like Strory (5/75), Strories (4/109), Strore (0/16), and Strores (0/4).

(Going out of business sign in NYC, from Wikimedia Commons.)