By chance, my sister and I happened to be up during the wee hours of January 11 when the news broke 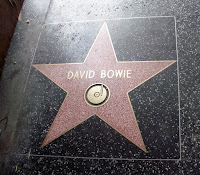 that David Bowie had died the day before. (Don’t ask—it wasn’t anything fun or exciting.) Since then there’s been an outpouring of tributes to his music, his extraordinary career, and the man himself. Words such as “chameleon,” “reinvent,” “icon,” and “legendary” appear often in characterizations. In some ways, these tributes make it even harder to believe he’s really gone. Then there’s the fact that we’ve been listening to Blackstar (his “parting gift,” according to long-time friend and producer Tony Visconti), which was released just this past Friday.

If you, like us, are mourning the passing of Mr. Bowie, put on your favorite album and enjoy reading all those accolades. And then if you feel like it, take on the false Charct* in your catalog. For reference, there are 50 entries in OhioLINK and 1,498 in WorldCat.

(David Bowie’s star on the Hollywood Walk of Fame, by iluvrhinestones, from Wikimedia Commons)