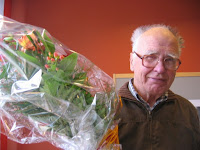 I can't seem to type the word Carlson without making it Carolson instead. Given how often we write our own names, it's probably unusual to make a typo while doing so. (Though I do recall a time when I kept fishily, if unofficially, signing my emails Carp;—fan mail from some flounder?) On the other hand, it's sometimes easy to introduce oneself into another person's name uninvited. Don't ask me to explain, but it seems that there are actually two mathematical theorems, known respectively as Carlson's theorem and Carleson's theorem. "Not to be confused," advises Wikipedia. (Easy for them to say!) There were just two cases of today's typo in OhioLINK, along with 13 in WorldCat. A few were surnames correctly spelled, but considering there were no entries at all for "Carolson" in NACO, most any you might find will likely be ones you will want to correct.